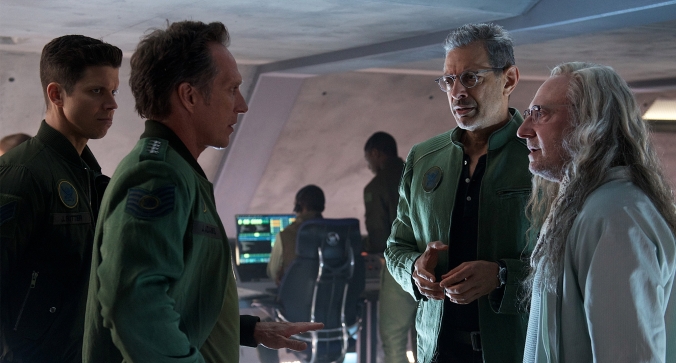 Alien invasions shouldn’t be complicated. The premise of 1996’s Independence Day starring Will Smith, Bill Pullman, and Jeff Goldblum couldn’t have been any simpler: aliens found us, they want to destroy us. Period. The effects in the movie were cutting edge but it mostly relied on the characters. No one can deny it was ridiculous and far too long, but at least it had substance. Twenty years later, squeals of delight were unmistakable when the trailer for Independence Day: Resurgence was revealed. Everyone (well, almost) was coming back! Time for America to kick some more alien ass on behalf of the planet! It had so much promise. Unfortunately, twenty years of technology and overthinking by original director/writer Roland Emmerich took over and the movie turned into some overblown, overloaded, CG-dominated, hollow train wreck. The fact that it (somehow) took five writers to develop the script is nothing short of baffling.

Newcomers to the Independence Day sequel include Liam Hemsworth, Jesse T. Usher, and Maika Monroe. They’re the young ones to draw in the new crowd, but they don’t really get the opportunity to offer up much more than their pretty faces. The old cast is there for pure nostalgia and to make the movie a true sequel. Jeff Goldblum is always a delight, and twenty years hasn’t made him any less funny as David Levinson, the guy who always finds a way to beat the aliens. David’s very Jewish father (Judd Hirsch) also makes an appearance, Yiddish slang and all. At first it actually seems quite remarkable how many original characters make a comeback, but less impressive when you think of how many blockbuster opportunities they would have had in the past twenty years (psst, the answer is “not many”). The result still has its fun moments, but is only mildly entertaining.

To say the story line is complex and convoluted is an understatement; there’s so much going on that you generally stop caring past a certain point. If the whole point was to make it “bigger” than the original, then they definitely succeeded. But “bigger” doesn’t always mean better. Independence Day: Resurgence explores the reasons why the aliens come back; it turns out it’s for the Earth’s core and – big surprise – to destroy the planet! What you get in the end is a flurry of fighter jet chases, a display of way too much alien-derived earth (and moon) technology, entire cities picked up and slammed back down, tsunamis (à la San Andreas), destroyed landmarks, and a clumsy attempt at a deeper plot involving a giant alien queen  and a mystical white sphere. The only saving grace is that this film is 2 hrs instead of 2 and a half, but somehow it still feels just as long.

Unfortunately what made Independence Day great in 1996 is exactly what Independence Day: Resurgence lacks. Some audiences may still be able to derive some escapism pleasure from it all, but most will wish they left the original to stand on its own. All of a sudden Will Smith seems like the smart one here for not taking part in this mess.  Then again, he can afford to turn down a summer blockbuster role from time to time.

Independence Day: Resurgence was released in theatres on June 24, 2016 and has since taken home more than $300M worldwide.