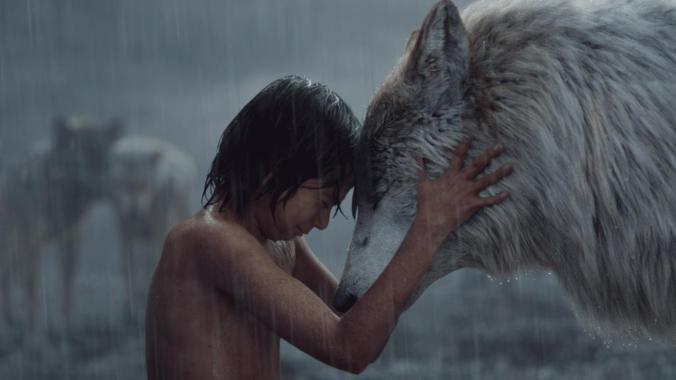 The Jungle Book will make you feel like a kid again and make you believe in the fantastical, even if just for a couple of hours. You will see talking animals and will never think twice, you will see a young boy running through the jungle, hopping through trees, and you will never balk.  Nothing could be more real.

Despite what your eyes and heart may think, Jon Favreau‘s big budget Disney movie was filmed entirely in an L.A. studio. The only “real” element of The Jungle Book is Mowgli, played by newcomer Neel Sethi in his Hollywood debut. And what a debut! The fact that he was interacting with hand puppets and a blue screen most of the time is simply astonishing, especially for a 12-year old with no acting experience. He certainly holds his own as the star of the movie and looks every bit the part of Mowgli, the young boy raised by wolves in the thick of the jungle.

The all-star cast providing the voices for the animals includes: Bill Murray (Baloo), Ben Kingsley (Bagheera), Idris Elba (Shere Khan), Christopher Walken (King Louie), Lupita Nyong’o (Raksha), and Scarlett Johansson (Kaa). Each actor was absolutely perfect for their character and brought them, literally, to life in such a way that did justice to the original movie. You might be one of the lucky ones who giggles like a child when Bill Murray breaks into a subdued version of “The Bare Necessities” and Christopher Walken sings “I Wanna Be Like You” in his universally recognizable voice. It was a necessary risk to add a couple of the original musical numbers and it paid off, especially for the adults who were hoping to hear at least a couple notes.

There’s no doubt that The Jungle Book will appeal to almost everybody, from young to old; from a child who has never seen The Jungle Book (1967) to the adult who remembers seeing it in theatres. The only warning is that some scenes might be too intense or scary for really young children, and if you’re terrified of snakes you might want to close your eyes when you hear Scarlett Johansson’s husky voice.

One thing is for certain, Jon Favreau has an immense appreciation and respect for both the 1967 Disney classic and Rudyard Kipling’s stories; and it shows. The Jungle Book is 21st century magic.

Watch this truly remarkable behind the scenes featurette:

The force of nostalgia is strong with this one. It could possibly be the one time parents and grandparents appreciate a sci-fi film more than the kids; because it’s not just about the action, it’s about the feeling you get from seeing old friends again after spending more than 30 years apart. Although it’s true that Star Wars never really went away (since the 70’s it’s been an almost constant thing in our lives – the merchandise, the toys, the digital remastering, the re-releases, and of course the prequels), this new movie feels like a real homecoming.

People will be, and have been, flocking to Star Wars: The Force Awakens in droves since it was released in theatres on December 18, 2015. It’s everything that fans, both young and old, were waiting for. We can finally let go of Episodes I, II, and III and pretend they never happened at all; they have been replaced with a reboot that we all deserved and waited so long to see. All it took was a new director, producer, writer, a (mostly) new cast, better technology, and a couple hundred million dollars.

The newcomers to the series need to be applauded because they essentially carry the movie. Their lead roles in the film were kept secret (even from their parents) and the end result was pleasantly surprising. Both Daisy Ridley (Rey) and John Boyega (Finn) had not done anything of consequence up until this point and are well on their way to becoming stars. Their acting abilities are so far beyond anything that had been seen in Star Wars previously and it’s certainly a breath of very fresh air for the series that struggled in that department in the past. Other supporting actors like Oscar Isaac (Inside Llewyn Davis), Domhnall Gleeson (About Time), and Adam Driver (This Is Where I Leave You) are all slightly more recognizable and accomplished actors and played their parts perfectly, especially the two villains. Oh, and you’ll fall in love with the new droid BB-8; it doesn’t say anything but it’s amazing how much can be conveyed with a few beeps and bops and a slight tilt of the head. Bringing back R2-D2, C-3PO, Chewbacca, Han Solo (Harrison Ford), Princess Leia (Carrie Fisher), and Luke Skywalker (Mark Hamill) was icing on the cake and probably the best thing that J.J Abrams was able to accomplish early on with Episode VII.

The plot of the film isn’t overly complicated and thankfully doesn’t involve any council meetings or a senate. It is focused on finding the location of Luke Skywalker and defeating the evil Empire (once again) who have created yet another planet-destroying weapon. There are a few other side-plots where it helps to have seen Episodes IV to VI, but it remains something that can still be enjoyed by strangers to the galaxy.

With all the terrible things going on in the world today and with tragic headlines only a click away, Star Wars: The Force Awakens offers the chance to escape to a galaxy far, far away. It won’t change anything, but it’ll help you forget as you’re immersed in a world where evil is literally black and white and the good guys always win.