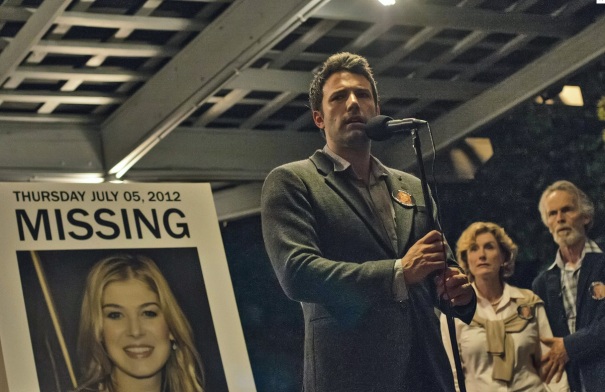 How well do you know your spouse? That is the question that forms the premise of Gone Girl, David Fincher’s latest masterpiece that stars Ben Affleck and Rosamund Pike as “Nick” and “Amy”, a couple struggling through their marriage as the movie begins on the morning of their 5th Anniversary. It is on this day that Amy disappears and Nick is suddenly thrown into a tumultuous investigation where he is the prime suspect. It begins slowly, with a lot of questions and clues, and progressively ramps up until it grabs a hold of you and doesn’t let go.

This is not the first glowing review for Gone Girl, nor will it be the last. It’s an odd mix of thriller, mystery, and drama with enough giggle-worthy dialogue thrown into it to make it truly unique. It is gripping from the very beginning and hangs on to your attention until the credits roll. Gone Girl‘s running time is 2 hours and 29 minutes but it never feels forced or dragged out. In fact, the only disappointment was that it ended at all.

Aside from Affleck, who is perfect in his role of the lost husband making all the wrong moves in the ensuing media storm, the cast of females in the film is what gives it it’s punch. Rosamund Pike is truly amazing, and saying anything else beyond that would be giving too much away (it is a film that relies on suspense and genuine shock, so providing any more details in a review would be a disservice). Supporting actress Carrie Coon takes on the role as the bold, tell-it-like-it-is twin sister “Margo” and Kim Dickens is the bright lead detective assigned to the case. Both are very compelling and often funny as “Nick” slowly pieces everything together surrounding his wife’s sudden disappearance.

The movie is based on a best selling novel of the same name by Gillian Flynn, and one can only imagine how good the book is based on the success and reception of the film so far. Given the detail in the movie, it’s hard to believe there could be more to the story that just didn’t make the cut.

The instant buzzing of discussion and the looks of pure astonishment and joy on the faces of the movie-goers once Gone Girl ended said it all. It’s still early, with Oscar season right around the corner, but this is easily the best movie of the year (so far).