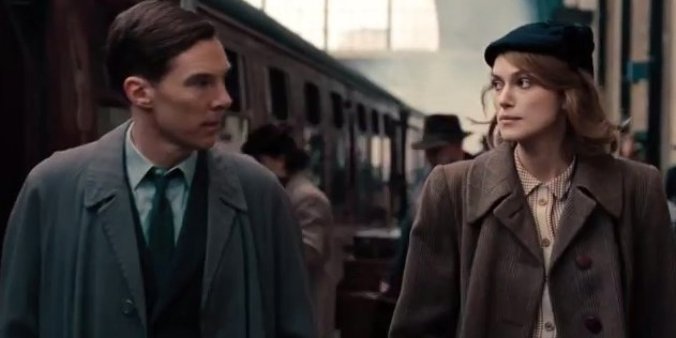 Spectacular, simply spectacular. The Imitation Game exceeds expectations in every way and certainly deserves all the hype. If you aren’t already on the Benedict Cumberbatch bandwagon, then you will be after seeing this movie. His portrayal of Alan Turing, British mathematician and the father of computer science, is perfection. As with most geniuses, it would appear that Turing’s strength did not lie in his social skills or his ability to pick up on social cues and Cumberbatch captures the social awkwardness and egotism so well that one forgets that he just played “Khan” in Star Trek Into Darkness. It seems he can do no wrong these past couple years and he has earned a well-deserved Golden Globe nomination for his most recent performance. Kiera Knightley also stars as Joan Clarke, a close friend and fellow cryptanalyst who worked as a code-breaker at Bletchley Park with Turing.

The Imitation Game covers a lot of ground and touches upon various points of Turing’s life, including his homosexuality and how this secret affected his life, relationships, and his career. It also briefly touches upon sexism and ethical dilemmas but doesn’t overdo it in any way. The movie keeps you interested and in awe of what this man could do (and how his mind worked) in a time when radios ruled and television and computers were still just ideas waiting to be realized.

The various time jumps were flawlessly executed and never lost the audience as the story moved from the 1950’s to the 1930’s/1940’s and finally to the 1920’s when Alan Turing was just a boy at school struggling to fit in. We watch as Alan discovers his passion for codes with the help of a special school friend and eventually ends up helping to do the unimaginable – break the Enigma encryption. Most people have heard of Enigma machines, as they were a major player in World War II and used by the Germans as a means of encrypted communication, but Alan Turing’s story is an instrumental piece of history that was mostly unknown until the latter part of the 20th century. The Imitation Game is Hollywood’s first real attempt at bringing his story forward and to the rest of the world.

As it goes with movies of this type, there are a number of historical inaccuracies that have come to light and it would seem that Morten Tyldum as Director has taken some liberties for the sake of making a good Hollywood movie – but boy, did it ever work. If the historians in the audience can excuse this, then what is left is a great film about a great man whose contribution to the end of WWII cannot be ignored. Perhaps it will even get movie-goers to do their own research on the event that likely saved millions of lives, maybe even some loved ones who were fighting while the mathematicians were codebreaking.

In a span of about two years, Louis Zamperini was in a plane crash, stranded on a lifeboat for over a month, and was tortured in multiple Japanese Prisoner of War camps. Unbroken follows his story, which begins with him as a young delinquent and then as a track star who eventually makes it to the 1936 Olympics in Germany. He was on a rescue mission with a few other men during WWII when his plane went down over the ocean. What followed the crash is the main focus of the movie and how one man never seemed to lose hope and how sheer determination allowed him to survive an ordeal that hurts just to watch on the movie screen.

Unbroken is slow and you feel almost all of the 137 minutes; however, it is still worth watching even just to see Zamperini’s story unfold and learn what it’s like to truly appreciate life. There are two main parts to this story – the lifeboat ordeal and the POW camp experience that immediately followed. The weeks spent on the lifeboat with two other men is where you really get to know Louis and see him as a likeable, caring, and resourceful young man with an almost unmatched will to survive. After breaking the record for the most days spent stranded at sea, they are “rescued” by the Japanese and face a completely different challenge.  The fact that he survived both is pretty unbelievable, especially when a sick guard seemed to really have it out for him in the camp.

For a group of newcomers, the acting is quite good. There are a few familiar faces whose names you likely don’t remember, such as Domhnall Gleeson (Anna Karenina, About Time), Jai Courtney (Jack Reacher, A Good Day to Die Hard, Divergent), and Garrett Hedlund (Troy, Four Brothers, On the Road, Inside Llewyn Davis) but this is definitely the breakout movie for the lead actor Jack O’Connell. Both he and Domhall Gleeson lost a significant amount of weight for the sake of their roles and their performances seemed genuine and believable.

The biggest surprise Unbroken has to offer is the fact that it was written by Joel and Ethan Coen. These brothers are best known for their quirky humour, clever banter, and generally movies that don’t tend to appeal to the masses (Fargo, The Big Lebowski, No Country for Old Men, Burn After Reading). This seems to be a totally new territory for them and it’s really difficult (if not impossible) to see any of their typical style in the script – it’s not funny, it’s not satirical, and it has no big-name actors. Even so, it’s a job well done for a serious biography-style film and Angelina Jolie did the story justice as a Director.

Although Unbroken received applause in the theatre upon conclusion (which is relatively rare) it didn’t quite hit the expected homerun for a release this late in the season. The audience who will enjoy this movie the most are likely the older generations who have longer attention spans and a deeper connection to WWII. The younger generation will be happy they saw it and will potentially complain about life a little less afterwards, but will ultimately find it a little more forgettable. Regardless, the name Louis Zamperini will live on and those who see it will definitely remember his remarkable story – which is the whole point, anyway.

As far as World War II movies go, Fury does a good job following five men as they battle the Nazis from inside their Sherman tank, all the while being surrounded by smoke, mud, fire, and death – lots of death. Fury is essentially a day in the life of this odd band of characters, lead by their Sergeant (Brad Pitt), the man to whom they give credit for keeping them alive since the fight in North Africa some years ago. In all honesty, their names, where they’re from, and what they did before the war doesn’t really matter in this film, what matters is their dedication to the fight and how they each play their part. There certainly isn’t as much character depth as there is in a movie like Saving Private Ryan, but then again that’s not really the type of movie Fury is trying to be (it’s also 35 minutes shorter, to put it in perspective). The main focus is on the rookie (Logan Lerman), a typist who suddenly finds himself at the forefront of the war and replacing a key member of the original team, and how Sgt. Don tries to break him in.

By far the movie’s best performances are put in by Logan Lerman and Shia LaBeouf. LaBeouf is almost unrecognizable as the overly religious and mustachioed gunner. Thankfully none of his former arrogant/witty/charming personas (for which he is best known) make an appearance in the film. Lerman flawlessly portrays the terrified rookie just trying to cope with his new situation and survive his new team. Brad Pitt puts in a solid performance, as usual, and shows just enough emotion to connect the audience to his character. It is unfortunate that a lot of the dialogue is lost in muffled and mumbled speech (the southern American accents don’t help much either), but the banter between characters is pretty great (and tense) at times.

The real reason to watch the movie is for the tank battles. As with any WWII movie, there is a lot of death and a fair amount of gore, but David Ayer seemed to make every effort to keep the battles realistic and exciting at the same time. The audience gets to watch the Sherman tank and its team operate in a number of different situations – from an open-field tank-on-tank battle to defending a post against a mass of foot soldiers. Each situation is gripping, has you on the edge of your seat, and makes you grimace as the odd body part gets blown off.

Another aspect of Fury that cannot go without mention is the score. There is one scene in particular where Steven Price’s music just adds that extra layer to an already emotional moment and allows the audience to really connect. And as rare as it is, the end credit music is equally as fantastic and is worth sitting through.

Overall, Fury was a decent WWII movie that is worth watching. It doesn’t feel too long even though its running time clocks in at 2 hours and 15 minutes. There are a few scenes that last a little longer than they should, but it isn’t painful but any means. Those who can’t handle violence should probably avoid Fury but most people should enjoy it for what it is.