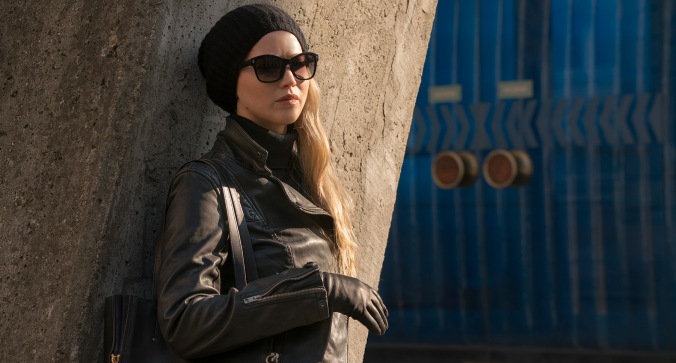 If you’re looking for an R-rated film with a take-no-prisoners female lead, graphic violence, and full frontal nudity, look no further – Red Sparrow has it all. Unlike most spy movies, this one does everything it can to deglamorize the spy world. Red Sparrow tries to shock you at every turn, and for the most part it succeeds. This is the main reason the film’s reception was hot and cold for the most part. Some found it intriguing and suspenseful, while others were overwhelmed with the violence and thought it cheapened the bleak tale of survival.

The story features a secret Russian government training program that trains its agents to use their bodies and intellect to extract intelligence information from unsuspecting marks. In this case, the mark is a C.I.A agent Nate Nash (Joel Edgerton) who is caught up in a complicated Russian-American intelligence battle. It turns out former ballerina Dominika Egorova (Jennifer Lawrence) is something of an expert in the art of seduction and is tasked with getting Nash to reveal his source, a high-ranking Russian mole. The plotline starts out simple enough, with Egovora being unwillingly thrust into the spy world,  learning the ‘tricks’ of the trade, and beginning her mission. It gets more and more complicated as it goes on as you aren’t sure about anyone’s motives (but that’s the deal with spies, no?). All you do know is that Egovora wants out of the life, and at any cost. Despite the mind-boggle, Red Sparrow stays interesting and – in true spy-thriller fashion – concludes with an epic triple-twist.  It also features the most realistic knife fight ever to be seen on screen. It’s certainly not for the faint of heart, but altogether a really impressive scene for all involved.

Director Francis Lawrence, best known for three Hunger Games films (Catching Fire, Mockingjay Part 1 & Part 2) and I Am Legend, has worked with Jennifer Lawrence and is clearly familiar with her talent. Her craft is certainly on display in Red Sparrow – from her Russian accent to her brief stint as a ballerina to a disturbing rape scene, she is undeniably one of the best actresses of our time and is as far away from being typecast as possible. While he may have directed a number of music videos in the early 2000’s for the likes of Jennifer Lopez and Will Smith (for real…), Francis Lawrence clearly has a passion for darker, dystopian-style films, and Red Sparrow is an obvious example of that. Supporting actors include Jeremy Irons,  Matthias Schoenaerts, and Charlotte Rampling.

All in all, Red Sparrow is a good watch. But while some people may have raved about it (in a positive way), it isn’t likely they (or anyone else) will be in the mood to watch it more than once. However, if you can withstand the wrenching torture scenes and typically enjoy a good thriller, taking the time to see it at least once is recommended. You will more than likely be satisfied with the ending – it’s one that sticks with you – and it’s almost-always exciting to see the darker side of the intelligence game. As mentioned before, the spy life depicted in this thriller is anything but glamorous. It turns out it’s not all disguises and martinis after all.

If Jennifer Lawrence is in it, it’s going to be a good movie, or so we have come to expect. Mockingjay-Part 1 is no exception. Fans of the Hunger Games series will flock to this movie and will love how it sets the series up for the big finale that will come in Mockingjay-Part 2, to be released next year. Part 1 sets the stage for the revolution that will come at the hands of the Districts as they unite in their fight against the Panem Capitol. Katniss Everdeen (Jennifer Lawrence) has unwillingly become the symbol of the revolution after the last Games and is now trying to cope with her new life in District 13. Using her status as the symbol of hope and strength, she does everything she can in order to get Peeta (Josh Hutcherson) rescued from the clutches of the Capitol and the evil President Snow (Donald Sutherland).

Based on the three books written by Suzanne Collins, the Hunger Games series has so far given the audience exactly what it wants. Although Mockingjay-Part 1 doesn’t quite live up to the excitement and action in The Hunger Games and Catching Fire, it is still necessary to complete the series and show more of Katniss’ inner struggle and her relationships with Gale, her sister, and Coin, the President of District 13.

Without all of the inner dialogue that plays a prominent feature in the book, it would be very possible for Katniss to appear as a very one-dimensional character on screen; but with Jennifer Lawrence playing the part, that never becomes an issue. She has a unique ability to touch the audience and make them feel something. There are some very exciting moments in the movie but the parts that really get you are the scenes where Katniss’ passion leaps across the screen and tugs at your own emotions as a viewer. It is very fortunate that such a talented actress has been involved with the series since the beginning, or it could have easily turned into an empty saga with atrocious acting like Twilight.

This is a series that must be watched in a sequence and Mockingjay-Part 1 will mean absolutely nothing to those who haven’t seen the first two movies. For those who have read the books, the suspense of not knowing at which point the movie will end is part of the fun, and knowing what is going to happen in Part 2 will also add to the excitement. Overall, Part 1 is both a solid adaptation of the book and a good prelude to what is surely going to be the most exciting and the most emotional film in the series.