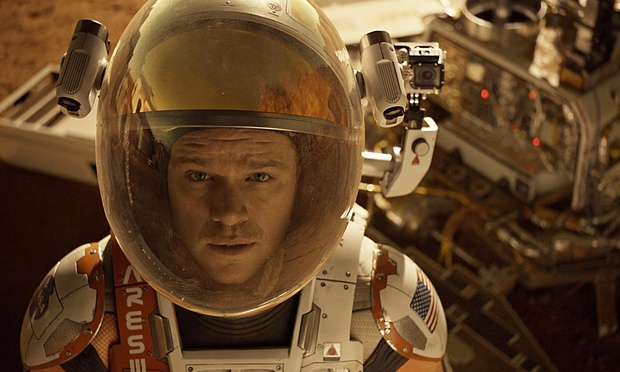 The words “Ridley Scott” and “comedy” are not often seen together in the same sentence, but in the case of The Martian, many reviews have made the exception. Director and Producer Ridley Scott is best known for films such as Blade Runner, Alien, Gladiator, and Prometheus – all great movies, but all with little-to-no humour. The Martian is something different altogether and definitely appeals to a much larger audience than the other films.

The Martian was adapted by Drew Goddard (Cloverfield, World War Z) from Andy Weir’s book of the same name. With a lot of heavy involvement from NASA as well as other space experts, the science behind The Martian strikes a balance between fiction and fact. Unlike the other movies it has been compared to, namely Interstellar and Gravity, almost everything in the book and the movie is said to be accurate or at least “possible”. The humour from the book was kept alive by Matt Damon, who plays the lead character Mark Watney who is left behind on Mars for a long, long time. With limited food and supplies, he is forced to use his NASA training and botany background to “science the shit” out of everything in order to survive.

The majority of the movie is a one-man show, and Matt Damon is absolutely hilarious. His character uses a video diary to capture his thoughts and document his time on Mars and despite his dire situation, he keeps his spirits up by staying active and seeing the humour in everything that happens. Jeff Daniels, who plays the Director of NASA, is also seen channelling his Newsroom character and is fun to watch. Other actors in supporting roles include: Kristen Wiig, Jessica Chastain, Sean Bean, Kate Mara, and Michael Peña.

The movie has everything – laughs, tears, action, and edge-of-your-seat sequences that will have you holding your breath. It is a story about science, exploration, adventure, and problem solving and how it can bring people together. The Martian was conveniently released around the same time as the discovery of water on Mars and hopefully it will bring some interest back to NASA and help it become what it used to be in the 60’s – exciting!

The Martian was released on October 2, 2015 and is now playing in theatres everywhere.