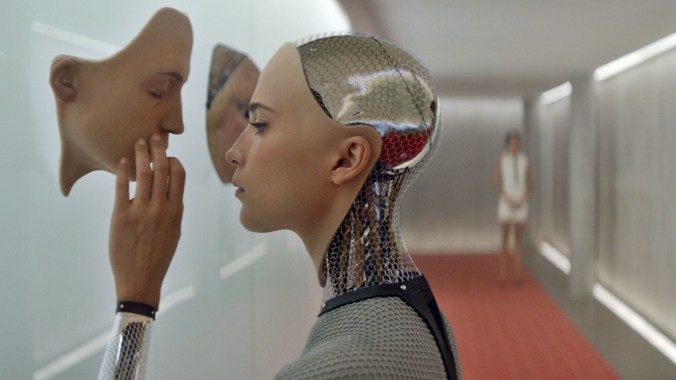 Since the movie’s limited releases in January and April, critics and regular movie-goers alike have been showering it with praise and calling it one of the best science fiction films in years. It’s smart, thrilling, and has a continuous dark undertone that makes you feel like there’s something wrong, but you just don’t know what. Unlike a lot of science fiction movies, you aren’t quite sure how it’s going to end, but with Ex Machina, you know it probably won’t be good.

Ex Machina is written and directed by Alex Garland, a talented British author (The Beach, which adapted for the screen in 2000), screenwriter (28 Days Later, Sunshine, Never Let Me Go), and now Director. His filmography will give a good indication of the “tone” of film one can expect from his new feature, he doesn’t stray too far from the dark and troubled.

Not everyone will be a fan of the pace of this film; some people may find it a little too slow and the shots a little too long, others will find the slow build up intriguing. Ex Machina is about a young, brilliant coder who wins a contest that will take him far into the wilderness to a compound owned by the CEO of his company. At this secluded, high-security resort is a new project the CEO, Nathan (Oscar Isaac), has been working on – artificial intelligence. Caleb (Domhnall Gleeson), the coder, has been tasked with assessing and testing the machine’s capabilities over the course of a week and finally determining if he has indeed succeeded in mastering artificial intelligence.

The score is eerie and certainly compliments the solitude and the gravity of the situation. To have created a machine that looks, feels, acts, and processes information and emotions like a human being is certainly ground-breaking on a science level, but dangerous on a moral and spiritual level. The film covers a lot of ground and oddly enough everything seems quite believable and well thought through.

The machine/robot, Ava, is played by Swedish actress Alicia Vikander (Anna Karenina, The Fifth Estate), who will certainly be getting more roles after the recognition she’s been getting lately. She is completely convincing as the sweet and innocent A.I. who just wants to be treated as a person and craves real human interaction. Domhnall Gleeson (About Time, Anna Karenina, Unbroken) is at the centre of the film and goes through a large range of emotions (awe, intrigue, mistrust, and finally madness) with such conviction that you just know he’s going to be around for a long, long time. These two actors, along with Oscar Isaac playing the binge-drinking, secretive mastermind behind it all who you just can’t seem to completely trust, anchor the movie in such a way that they keep you engaged and never really let go. It’s a thought-provoking slow burner and, as previously stated, some people may not have the attention span for it and it may be just a little too “messed up” for others; it is science fiction, after all.

Ex Machina only made about $36M at the box office worldwide and is now available on Blu-Ray and DVD.